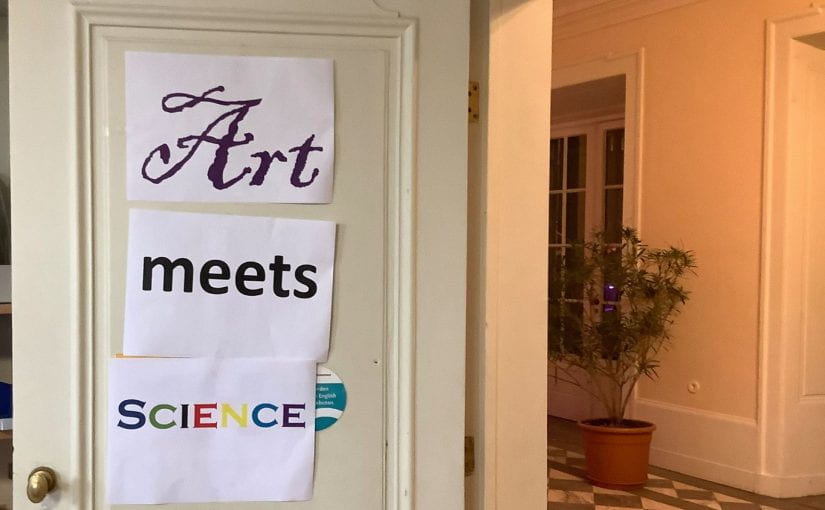 An art display and a wealth of scientific facts: yesterday, the kids in 4-6 set up a wonderful exhibition, the culmination of several weeks of research, planning and hard work.

The project began with the class teachers providing an overview of sciences including chemistry, biology, physics, medicine and astronomy.

The kids then chose their favourite science and, working in small teams, found out as much as possible about its history and the famous people associated with its development.

Having summarised these findings in a fact-sheet written in both German and English, as a final step – the arty part! – the kids were given a canvas and asked to paint an allegory of their science.

Allegorical paintings generally use stylised images of people to represent a concept (wisdom; beauty; astronomy), and for this reason Frau Pakhuylu provided a special lesson on drawing the human face and mixing skin tones in paint.

The resulting works of art were fantastic: full of skill, symbolism and inventiveness.

As an extra bonus, the kids presented their work to the 1-3 students, who were eager to see the paintings and learn about the different sciences.

We also had a visit from our lovely bookkeeper, Frau Schöttler, and our equally wonderful secretary, Frau Frank. Towards the end of the afternoon, parents stopped by to see the show, too.

Art meets Science… we think you’ll agree that this unusual combination adds up to fascinating new knowledge plus a LOT of fun!